Some of the best Libertarian media attention ever!

We were talking at today’s LPSF meeting with Mike ter Maat about his plans as a contender for the Libertarian presidential nomination, including how he hopes to get national media attention. The perennial struggle of Libertarian candidates to get the media to take notice and let the voters know they have a choice.

And then tonight on Twitter I see this dream coverage of one of our candidates from Rolling Stone, showing what is possible when the media actually do their jobs and give alternative party candidates their due:

Who Is Chase Oliver? The Person Picking Between Warnock and Walker – Rolling Stone https://www.rollingstone.com/politics/politics-features/georgia-senate-runoff-walker-warnock-libertarian-1234628538/

Pretty amazing! A Libertarian candidate cast as the central character and protagonist in a major national story is something we almost never see in mainstream media outlets. Chase Oliver sounds like a solid candidate with a good libertarian message. I hope he stands his ground, milks the publicity for all it’s worth to the party and movement, and endorses neither establishment candidate!

I just added a section about him to the Wikipedia page for the Georgia Senate race:

Always #FollowTheMoney ( this from a US media insider Me - PBS/CBS/RollCall/WashingtonPost/TheEconomist ) & be careful & thoughtful about what You Promote & don’t get hoodwinked : FYI : Donald (US$3.2Billioniare) *Trump-Fan/Trump-Pet & **Saudi PupPet & US$250Millionaire Jay Penske owns RS & WWD — is just shy of the Top Ten US Media corporations that monopolize & control & manipulate everything most folks obsess & talk about every day :

Young ( 43 year old) social climber Jay, following in the footsteps of his hero, reportedly also has a thing for misogynisticly & criminally pissing on women — LITERALLY : Penske racing heir and aspiring media mogul arrested for drunkenly urinating on a woman at Nantucket yacht club and then running away | Daily Mail Online 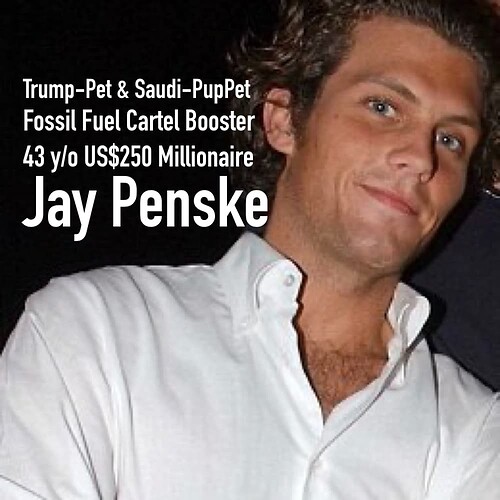 Chris Mendes, I’ve already gotten a couple of ReTweets from The @terMaatMike Campaign that demonstrate His appreciation for helping to spread his uncensored/uneditorialized remarks & insights to a broader audience & specifically to more Libertarians & libertarians & allies & the libertarian-curious & to put his potential LP rivals & opponents on notice.

Will [[ @Starchild ]] & the Official @SanFranciscoLP follow suit so that the primary screen of Your Twiterverse media can give Mike the exposure He deserves & needs to reach the thresholds of msmSnews media attention — FREE PRESS advertising/campaign dollars cannot buy, to reach polling benchmarks to earn Debate Stage status?

Under-utilizing SFLP social media tools while promoting msmSnews that muffles, mischaracterizes, smears & or ignores Us is not a path to success. 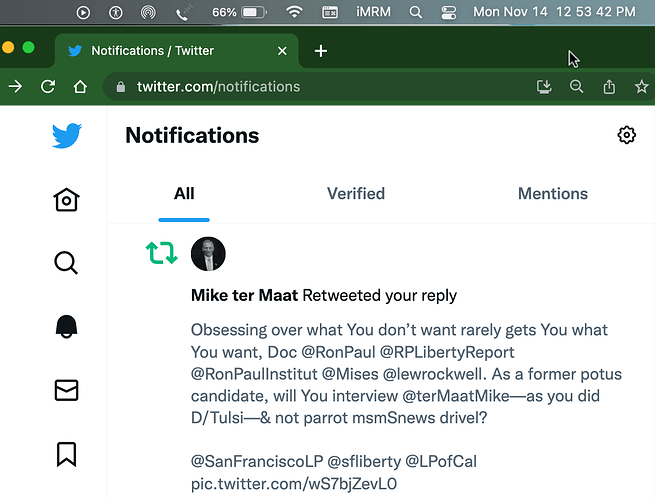 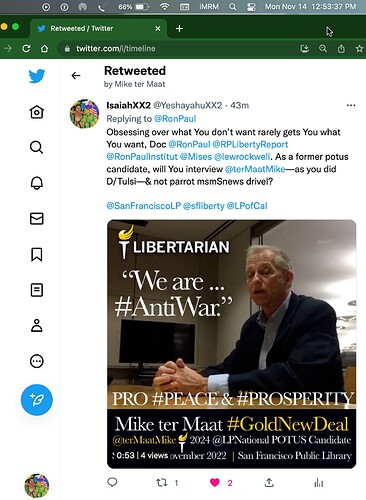