Michael Denny
Libertarian Party of San Francisco
No On Prop A

Have you bought the ingredients yet Mike?

My buddy Royce is coming over to help.

Brennan and the stasi coming for libertarians 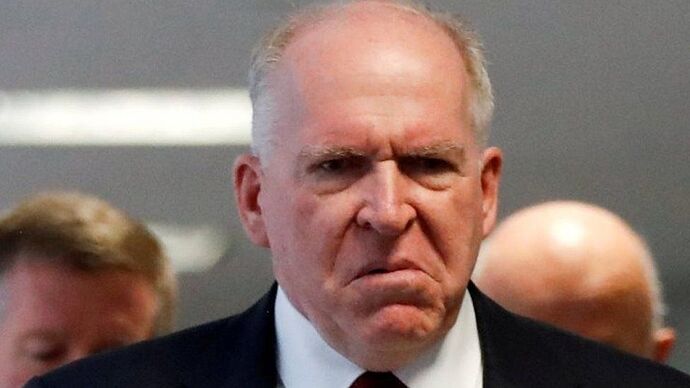 Let the purge begin? John Brennan, the torture-loving deep state warmonger who is loved by the left now because he opposed former President Donald Trump, is warning that the state is coming for you…

Good to hear from you – I followed the link you posted and read the short piece.

I would encourage you and others though to start new threads under new subject lines when posting about matters unrelated to those in the message to which you’re responding (as far as I can tell, this has nothing to do with Mike Denny’s group feeding the homeless).

Also desirable when possible, imho, is to focus not just on lamenting or warning about stuff in the news, but providing possible libertarian solutions or responses. Especially what we can do as activists at the local level. (Speaking of local, by the way, are you the Paul Kelley who lives in Marin? I was recently contacted by someone who might be interested in helping get an LP chapter going again there. Either way of course, you and others outside SF are always welcome to participate in this forum and attend LPSF meetings.)

So anyway, I get that torture apologist John Brennan is warning that intelligence agencies investigating the pro-Trump Capitol Hill rioters are coming after “even libertarians”. Any thoughts on what if anything we should do with this information?

Cool, Mike. Are the lunches (some at least) vegetarian, preferably vegan? I’m potentially up to help, but prefer not to work with meat. There are a growing number of delicious plant-based meat substitutes out there.

I would urge you for next time (if too late for this time) to consider buying veg*n ingredients for this worthwhile project, as healthier and more ethically and environmentally-responsibly sourced (even if you may prefer meat /dairy in your own diet). There is abundant evidence and fairly strong agreement on this, even among meat-eaters – I’ve cited a few sources below.

For a deeper dive, I recommend the documentary films “Forks Over Knives” on the health reasons a plant-based diet is better, and “Cowspiracy” on the environmental costs of meat-eating. Also “From Farm To Fridge” (less than 12 minutes long – From Farm To Fridge - Have mercy on animals - YouTube), on the ethical treatment of factory-farmed animals.

"Analysis published in the journal Sustainability from University of Bath Psychology PhD student Chris Bryant suggests that 73% of meat eaters surveyed considered veganism to be ‘ethical’, 70% said it was good for the environment and half (50%) considered it healthy. 60% thought veganism was ‘acceptable’.
By contrast, over 80% of respondents thought veganism was not easy, 77% thought it ‘inconvenient’ and over 60% thought it was not enjoyable. Attitudes from respondents towards vegetarianism were significantly more positive on almost all counts.

"‘We showed that the same dietary changes that can add about a decade to our lives can also prevent massive environmental damage,’ said Tilman, a professor in UM’s College of Biological Sciences and resident fellow at the Institute on the Environment.
‘In particular, if the world were to adopt variations on three common diets, health would be greatly increased at the same time global greenhouse gas emissions were reduced by an amount equal to the current greenhouse gas emissions of all cars, trucks, planes, trains and ships. In addition, this dietary shift would prevent the destruction of an area of tropical forests and savannahs as large as half of the United States.’

The study compared health impacts of the global omnivorous diet with those reported for traditional Mediterranean, pescatarian and vegetarian diets. Adopting these alternative diets could reduce incidence of type II diabetes by about 25 percent, cancer by about 10 percent and death from heart disease by about 20 percent relative to the omnivore diet.

Adopting these or similar alternative diets would also prevent most or all of the increased greenhouse gas emissions and habitat destruction that would otherwise be caused by both dietary changes and increased global population."

– From New Research Says Plant-based Diet Best for Planet and People - Our World [NOTE: I am not particularly concerned about “greenhouse gas” emissions, but I am concerned about wilderness/habitat destruction and species extinction –Starchild]

“The production of meat and other animal products places a heavy burden on the environment - from crops and water required to feed the animals, to the transport and other processes involved from farm to fork. The vast amount of grain feed required for meat production is a significant contributor to deforestation, habitat loss and species extinction. In Brazil alone, the equivalent of 5.6 million acres of land is used to grow soya beans for animals in Europe. This land contributes to developing world malnutrition by driving impoverished populations to grow cash crops for animal feed, rather than food for themselves. On the other hand, considerably lower quantities of crops and water are required to sustain a vegan diet…”

Righty-o, the former chair of the marin county LP. I’ve received a flurry of emails over the past few days from SFLP, so when I saw this latest piece of Brennan Stasi police state propaganda, thought y’all might find it interesting - didn’t notice different threads. Solutions? Politics has failed. Lots of ‘blame Trump’ going around, but the deep state controls everything. They’re not going anywhere unless americans remove them. Even Trump’s scotus appointees stabbed him in the back. There are solutions in the constitution and declaration of independence…

Thanks, Paul. I wouldn’t describe the Supreme Court ruling upholding state-level election results as Trump’s appointees “stab(bing) him in the back” though – considering they don’t even have constitutional jurisdiction to overturn state-reported election results, it was clearly the correct ruling. Further, not only are his appointees not obliged to vote the way he wanted them to, but it would clearly be a major breach of judicial ethics for them to base their rulings on any such consideration.

Trump deserves plenty of the blame he’s gotten, and of course Biden and others do as well. It’s still kind of head-spinning to realize that local corruption kingpin Willie Brown’s former mistress Kamala Harris, who I briefly debated in a CNN news clip when she was fighting as SF’s district attorney to keep prostitution criminalized here back in 2008 in the face of our ballot measure to decriminalize it (despite once telling the Harvey Milk Club she should be considered an “honorary sex worker”), is now one weak heartbeat away from being president of the United States.

Regarding “threads”, I was mostly just referring to the subject line title – which I forgot to change myself when replying to you!

Would you be interested in helping get the Marin LP up and running again? Which city are you in up there, btw?

Okay, it wasn’t my imagination. I did change the subject line – and Discourse changed it back to “Libertarians Feeding the Homeless”. I know because it just happened a second time. And this message I am posting with the subject line “Former CIA director’s remarks about going after ‘even libertarians’” – but I’ll bet it doesn’t post that way.

Again Jeff I hope this is something you can get fixed. It’s a bummer that so many problems with the email interface are cropping up.

Anyway, it turns out that the Libertarian National Committee is also discussing this comment of John Brennan’s. Apparently the Colorado LP put out a hard-hitting resolution about it. See forwarded message below.

Hi @Starchild, we’ve discussed this issue at Changing email subject line should start a new post . On that topic, I shared a workaround for changing the subject.

I also linked to the discussion I’m having with the Discourse developers. Infuriatingly, the founder replied, “This is rather intentional at the moment. … If someone wants to start a new topic, they should send a new email.” I made a case for how it’s the wrong behavior, but the founder checked out of the conversation.

In any case, I should be able to eventually address the problem with a plugin. If anyone wants to help develop it, please let me know!