I just came back to the Bay for spring break and as I was riding Bart from
the airport I couldn’t help but notice the exceedingly long list of
prohibited activities in the Bart system (photo attached). Some of them are
common sense, but others of them just seem like a laundry list of a
totalitarian state. I’m deeply troubled where this is going and what it
means for freedom here in the Bay. 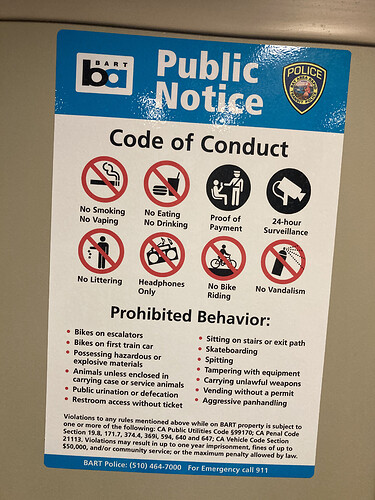 I don’t know Richard: I think they’re all pretty fair (except maybe the one RE: “restroom access without ticket”).

I used to travel on BART quite a bit, and witnessed my fair share of urination, spitting, aggressive pan-handling, violence and inconsiderate people blasting loud music.

Yes, I know the prohibition against eating and drinking might seem harsh, but honestly, given the lowly behavior of some BART riders, they can’t be trusted to eat like civilized human beings – nor can they be trusted not to get drunk and become aggressive/violent.

Honestly, I see these rules as being the minimum required for civilized use of the BART, and I would like to see these rules more rigorously enforced by BART police (who are thin on the ground, to say the least).

I have to say I’m with Richard on this. BART management have a troublingly authoritarian, control-oriented approach to how they oversee the system. Treat people like animals, bark rules at them (literally and figuratively) subject them to cold, ugly environments that look like jail facilities, and experience shows they will be more likely to act accordingly.

Panhandling may be annoying to those who don’t want to give, but it is free speech. And unlike government taxation, it is asking, not just stealing. It would be better though if BART would stop discouraging vending, busking, performing, and other more community-service-oriented options for poor people to earn a living rather than begging.

Eating and drinking isn’t the issue; littering is. But the trains lack trash receptacles, so what do they expect? I think BART honchos who are in bed with labor unions would rather pay a small number of janitors very good money than hire a larger number of janitors to keep the trains and stations clean. This is likely related to why the restrooms in many of the stations remain closed (which is one of the reasons some patrons pee in places like stairwells and elevators). They use the threat of terrorism as an excuse (they were first closed after the 9/11 attacks), but this has never made any logical sense. Why would a would-be terrorist set off a bomb in a secure restroom when they can easily just walk onto a train and detonate a device in the tunnel? The truth about BART’s long-term restroom closures is more likely that they just don’t want to be responsible for cleaning them. Those that are open are often filthy, poorly supplied (including frequently being out of soap, which is ironic given that BART rules insist people wear face masks even in outdoor areas of stations), and lacking basic amenities like mirrors, trash disposal containers, and hot water.

People playing loud music on the trains can be annoying for sure, but it’s far less annoying (and less frequent) than the screeching sounds chronically emitted by the BART trains themselves. I ride BART fairly regularly, and I’ve hated doing so when I didn’t have headphones or earplugs with me, as the noise can be physically painful. The new hard plastic train seats don’t help – hard surfaces in a contained area amplify noise. Maybe instead of enforcing a rule against loud music, they should take some of the money they’re spending on salaries, benefits, pensions, and other personnel expenses, and use it to better soundproof the trains.

In short, system management and their actions, not the actions of riders, are the real problem with BART. Harsher enforcement of rules won’t help. More government rules make a society less civilized, not more civilized, even when you have a well-trained, well-behaved police force and not officers disposed to behave like the killer of Oscar Grant.