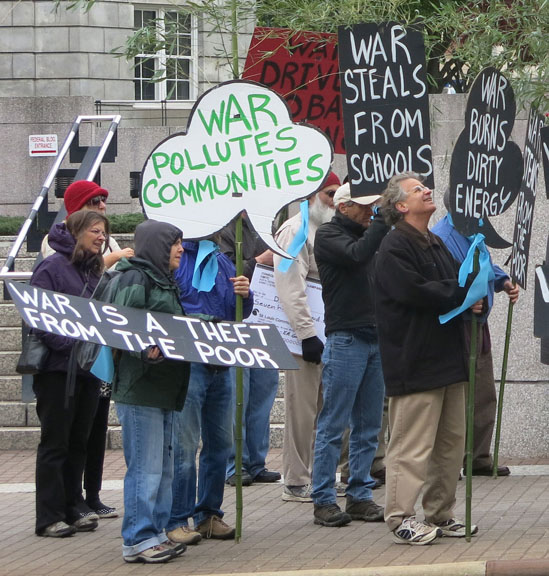 The National War Tax Resistance Coordinating Committee is a network of organizations that supports individuals who refuse to pay for war.

On this, the sixth year of our refusal to cooperate with the tax custom of
the USA, we write to you to reaffirm our stance. During the blatantly
corrupt, feverishly murderous administration of George W. Bush we could not,
in good conscience send monetary support to the government, no matter the
consequence to ourselves.

Now that Barack Obama, the great “hope” for this country has filled Bush’s
shoes, and the killing has increased (with carpet bombing of Libya, military
operations in Syria, Yemen, Iran, Somalia, the Philippines and Pakistan, and
the continuing occupations of Iraq and Afghanistan), and none of the 1000+
US military bases have closed, and the US military remains the most
destructive force on the planet, we hold our commitment to refuse to pay
taxes to the federal government with determination.

May you find the happiness that is possible by living according to your own
principles, as we have found. May you stop aiding in the murder of people,
the oppression of human passion and the destruction of life on Earth.

Six years of amazing moral courage!! But how, without beeng carted out to jail? I guess I better become more informed on the ways of the "IES.".

What an excellent letter; it's like sweet music to my ears!

My guess as to why Maureen Mackenzie, the letter's author, hasn't been imprisoned is that select members of the government are debating whether to kill Mackenzie via the National Defense Authorization Act, which I believe was the cause of Andrew Brietbart's sudden and mysterious death, or to have a rigged show trial to make an example of her and to make her suffer in life.

With government the internal debate is always between murder and destruction or sadism. If not for public education, an FCC-controlled media and most churches, I doubt government psychopaths would be as successful as they are with their do-gooder act.

I respect your heartfelt post. However, I am unable to keep from repeating my usual mantra. So here it goes, again! The "IES" is a product of what our elected representatives will or allow. Thus, the ultimate responsibility lies with those who placed those representatives where they are -- we the people. Oh, I have been told I am so naive for thinking so. OK, so why is Ron Paul totally ignored by the general public? Why does the general public keep electing those who will feel the necessity to appoint those who will consider the choice of murder, destruction or sadism? "Educating the public", how well are libertarians doing so? How many care to make the effort? Ultimately, whose responsibility it is for the choice to murder or destroy?

I would never make the mistake of considering you naive. I've always looked forward to your posts because of your insight and your polite, persuasive manner.

When we talk about Libertarians having difficulty successfully getting our point across to the general, non-libertarian public, I think of those conversations as always having three participants, even when only two people are present. The third participant lives in the mind and wallet of the person whom the Libertarian is trying to persuade; that third person is an amalgam of government, mainstream media, public education and the various departments of government that provide jobs to approximately half of the United States' workforce and give checks to millions of people who aren't working and, of course, there are bailouts for billionaires.

Ayn Rand, Harry Browne and Ron Paul have done a great job getting the libertarian message out. The problem is, with most people, government jobs and government hand-outs trump truth, morality, hope for a better life and political philosophy, and a large part of those who don't work for government and aren't on the dole are under the influence of the 24/7/365 Left-Right mainstream media, who go out of their way, depending on the point in time of the election cycle, to both ignore libertarians and paint libertarians as cold-hearted, absurd oddballs unschooled in what makes the American welfare-warfare system great. For both groups, Left and Right, fear of the unknown (freedom) and fear of change (things could be worse) are factors that also work against our message.

I believe the elections and the coverage of the elections are rigged (Many people disagree with me on this point) and because of this Ron Paul will not be allowed to take office, if the vote counters discover Paul has the majority. I do, however, see libertarian principles having a chance of taking root when the empire crashes. Hopefully, though many people's lives and fortunes will be destroyed, enough people will then realize the current system was the wrecking ball and will not allow the status quo to be rebuilt during that generation. But, then again, after the collapse of the USSR, Vladimir Putin, former head of the murderous KGB, was elected president with 63% of the vote, assuming the count wasn't rigged, earlier this month.

What are your thoughts?

Excellently expressed!! You just described my suspicions when I try to engage the general public at outreach events! Few are willing to accept a philosophy that speaks of leaving them to their own devices, or at the mercy of the voluntary kindness of strangers. And why would the lamestream media behave differently -- why would they incur the risk of encouraging anyone to take the leap of faith of which we Libertarians speak? Not to mention our fearless leaders -- why upset Wall Street or Labor, the ATM machines that keep them in office?

When (looks like more when than if each passing day) the house of cards comes crashing down, I would place a bet that the outcry will be that the regulations, the safety nets, the paying one's fair share of taxes were not substantial enough! As you indicate, Putin is back in office, right?

As an aside, you mention Ayn Rand among those who have done a great job of spreading the libertarian message. True, as perhaps did Adam Smith. Unfortunately, promoting self-interest, as the mind set of our general public seems to indicate, does not necessarily lead to what Smith and Rand had in mind!

So, Don, those are my thoughts about the challenge. I do not believe libertarians will ever be able to formulate a unified response, but we each can attack the part that interests us (economic, social, taxation, ballot access, etc.), while we wait for a Messiah who will succeed in transforming our oddball point of view into a message the general public can accept.