Last night in Pennsylvania, Jo Jorgensen's vote count DROPPED BY HALF over a few minutes

Very interesting. People are tweeting in that thread that something similar happened to Bernie Sanders in the primary:

On the other hand, we should all be very careful what we take at face value online. It's easier than ever to post "fake news", including images. I hope what happened with Jorgensen's vote count in Pennsylvania is fully investigated though.

Maybe that will be a silver lining in Trump's desperate fight, employing a reported 450 lawyers, to deny losing the election and hang onto power (as was entirely predictable he would; I understand he never even acknowledged losing the popular vote four years ago.)

Anyway, thanks for sharing! 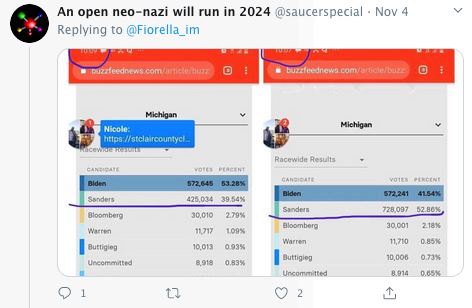 Today I heard numbers from Detroit this has been a problem not just this year but with a similar mechanism used to screw Bernie. Hundreds of precincts voted more pallets than the total number of people who got ballots at the door. I believe this is called overvoting. Perhaps they just keep 60 shows votes so they could bump up the other judge votes let’s try that again perhaps a deep Sixt Joe’s votes so they could pad the other shows boats.